Twelve residents are displaced after a fire damaged their apartments at 1200 H St. SE on Friday, January 15, 2021.  Six second-story units, as well as two businesses located on the first floor, were damaged in the fire, which began just after 8 p.m.

According to VRFA fire investigators, the cause of the fire is accidental, due to a malfunctioning lighter and the damage is estimated at $1.3 million for the structure and contents. Two apartments sustained significant fire damage, while the remaining four units were moderately damaged by smoke and water. The businesses on the bottom floor received heavy water damage.

A neighbor to the fire unit called to report smoke coming from the apartment at 8:01 p.m.  Firefighters arrived to find flames showing from the upper story apartment and the building evacuated. Reports of a trapped twelve-year-old child and an individual barricaded in an apartment were unfounded, but firefighters did rescue a cat found in one of the units.  The feline received oxygen at the scene and was taken to a local veterinarian for further evaluation.

A second alarm was called just after 9 p.m. bringing in additional resources from Puget Sound Regional Fire Authority, South King Fire & Rescue, King County Medic One, and Zone 3 Rehabilitation. The fire was extinguished at 10:15 p.m. although a crew remained on scene overnight to monitor for hot spots.  One firefighter sustained minor injuries and was transported to a local hospital for treatment. The American Red Cross is helping the displaced residents with temporary housing and other emergency needs. 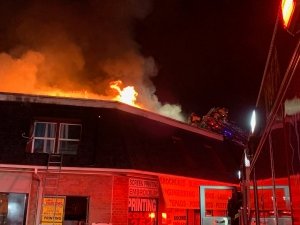